QuickTip Sundays: Facebook And The (Obvious) Importance Of Labeling And Taxonomy

I use Facebook more than MySpace for some things just because I think Facebook is more “adult” — the real name thing, more people from work, et al. More often than not, i’ll update my status over there and really don’t use MySpace for that work kind of thing, because, well, I view it as more as the local bar where Facebook is Starbucks where you discuss work and business.

However, uploading photos is a bear, and it demonstrates a real need for examining the taxonomy and labeling of a site. I ran into this over the weekend when I had some professional photos taken of me. I wanted to upload one so I didn’t look like I walked in from the prehistoric period and I had just invented the mouse wheel.

Upon arriving at your home page, there’s an application called Photos that shows everyone’s photos (which is where I clicked first, figuring, hell, I’ll manage my photos in the place where it says Photos). You can select Photos of Me, you can’t upload a photo. You can create a photo album, but there’s no link to says, “Upload Photo, Yo.”

I unless have a serious need to add 1,000 photo albums to my profile without any photos, creating a new photo album is completely useless to me. I would guess that 80 percent of the users have less than 20 albums, tops, so the importance of creating new photo albums is overstated, much like my demise.

(Props to Jason Hewitt for pointing out my overzealous use of Yo.)

I click on my name on the top right corner, and I arrive at editing my profile. I see a number of links front and center: 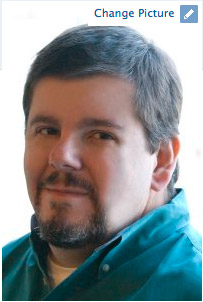 Maybe if I go to my profile, I can find something?

There’s an Add Photos link there, but because of the labeling and taxonomy (it’s under the Wall tab), I think I’m adding photos to my Wall. Why would I do that? I just wanted to upload one photo and replace my profile photo. It has nothing to do with my Wall.

I hovered over the profile photo accidentally and saw an edit picture link. (Never mind there was no way to know that I could even edit the picture — that was an interesting surprise.) I was able to click on the photo, and it showed me a number of photos I could select, but I couldn’t upload photos from there either.

Let’s click on that pesky little word that says Photos

I click on the Photos tab, and I see my albums, but I still don’t see a place to add a photo. After returning to my home page by selecting the back button on the browser, I figured out the Post a Photo was how I added one. When I did figure out how to upload a photo, the default action after I had figured out how to add a photo wasn’t that, but of creating an album:

And once a photo is up, figuring out how to change the album requires a fortune teller. Can you tell me where I can move the photo to another album is?

Frankly, managing photos and albums shouldn’t be this hard, but it illustrates how labeling and placement within a tab selection is very, very important. I shouldn’t have to take eight or so clicks to get where I want.

I had no idea for months where I could upload the photos, and since this is one of the main features of Facebook (Face is in the name, for god sakes), ease of use for managing photos is important, and I could spend one day with their developers to change it. If there is a Photos tab, that should make it very clear than you can upload and manage photos from that Photos tab, and it’s difficult to find to with Facebook, because it’s under Wall.

Placement of tabs and other links an taxonomy is very important, because there’s an implied meaning of what a link does depending on where it sits in the taxonomy. Here, I had no idea that the Post a Photo wasn’t just to The Wall, but to my profile. I’ve had friends ask how to upload photos (some of whom are Information Architects themselves!), and they couldn’t figure it out either.

It makes much more sense to me to put some of those links under Photos than the Wall.

(And seriously, someone at Facebook should be looking at the usage logs and have figured this one out, already.)

MySpace does a great job of handling this feature in its new interface, why can’t Facebook?

As a side note: I’ve messaged Mark Zuckerberg about this article — let’s see how long he takes to respond.