Or, Design Your Own Mobile Application With These Nine Easy Steps…

This year is the tipping point that’s really going to turn the World Wide Web into a “platform doesn’t matter” medium.  If you’re doing User Experience and you don’t have a mobile app in your portfolio, you’d better get cracking.

We’ve been working on a few applications as prototypes (iPad, iPhone, and Android), and I’m at version 1.1 of Pick An Excuse (finally iOS 3 compatible). I’ve made a few mistakes along the way but have found that designing apps for mobile devices isn’t that difficult.

If you have even an inkling of an idea, you should work on your own application — just for the experience. Mobile applications are just that — applications — aren’t as hard to design as you would think.

It’s All about Context, Baby

I do all my best user research at the local bars here in San Francisco, California. It’s a fairly connected crowd, and there’s always someone that has a device out. They always have an opinion about their phone, because people identify with their devices more so than other technology. Think about it, when’s the last time anyone talked about what television brand they own?

Watching people use devices at Tony Nik’s is one of my favorite pastimes. They send instant messages, answer emails, and check on local restaurants, all while having a Dark and Stormy. Fascinating.

It’s because of the context. They aren’t sitting at home eating Bon Bon’s while using the phone, they’re at a bar, at a restaurant, at work, or somewhere else.  The phone may not be the primary focus of their attention.

The fun thing about it is that all I have to do is ask a few questions, and they’ll tell me everything they love about their device — without having to buy them a drink.

There’s nothing worse than downloading an application that’s overly complicated. I was asked to download an application that did some really cool things, but it required quite a few clicks to get around. It was obvious the developers weren’t optimizing for the user experience and was stuffing as much functionality in the app as possible. Sometimes the best applications do one thing really well.

My advice: come up with something that’s silly or fun and that doesn’t have any profit potential whatsoever. My application is a wonderful conversation starter that compels me to grab people’s iPhones and download the application (and I’ll be doing the same for Android too!).

Additionally, set a budget for how much you want to spend. There’s nothing that makes you want to limit the feature set more than spending your own money. 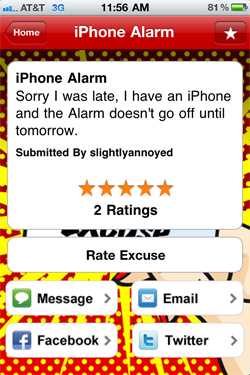 It’s for talking (or texting) to people!

It’s connected to the Internet, dammit!

The Pick An Excuse application is extremely social. You can send excuses to friends, share on Facebook, tweet excuses, and send them as texts. Most of the best mobile applications have some kind of social component (Foursquare, Facebook) that allows for some kind of integration and/or mashup.

There’s also a ton of services out there that have almost open APIs that allow you to pull in interesting data.  For example, Yelp! allows you to pull in reviews as long as you credit them. Foursquare has a bunch of APIs. There are many ways you can create an application that pulls data from different sources, make it fun, and have it seem complete and polished.

There’s nothing worse than pulling up a website, and you can’t read the small type on a mobile device.

You’re designing for a device that’s not much bigger than the size of a business card.  Additionally,  Most of the applications that should be designed for it need to be able to be used with one hand. There’s always the other hand holding the device, so designing for simple interactions is they key. Swiping is good, typing is not.

Surfing the web or using an application is a completely different experience. Certain things don’t work. For example, you can’t really hover over things, so you don’t have to design for those interactions. Lots and lots of typing is a pain in the neck on most devices too, so you have to simplify purchasing to the exact information you need. Large websites are a bad idea, because too many clicks mean pages that will never be visited.

The design has to be flexible too (Oh my god, we’re back to multiple browsers! At least most of them are using WebKit), but it’s mostly around the width of the device to make sure things line up.

One of the troubling things I find about a lot of mobile applications is the need to design a “different” user experience. Apple has provided this wonderful library of features, icons and user experience guidelines, and yet I see applications that have icons in a different location and custom actions that aren’t nearly as easy as they should be.  Let’s be honest, Apple knows better.

Unless you’re designing a game that requires an immersive experience, using a paradigm that’s different from all other applications means the user is going to have to relearn your application.

That’s not necessarily a good thing.

Apple’s gone to the trouble of producing top notch guidelines that almost guarantee a good user experience. The closer you get to the standards, the better chance you have getting the application approved on the first try (I did). That’s very important in keeping the cost down.

Why reinvent the wheel (and piss off Steve Jobs in the process)?

Mobile Necessarily Doesn’t Have to Be Native

One of the big assumptions about developing for mobile is that the applications have to be in the iPhone application store to gain traction. It helps, but it’s not true. As the mobile revolution takes place, you’ll see more and more websites that have a separate display for mobile devices.

Granted, most of them aren’t very good now (go to MSNBC now to see an example), but as time goes on, people will get better at designing for mobile.

One of the next applications I’ve been working on is actually a mix of web and native. We’re using the WebKit container to display the content and native functionality for some of the features. It creates this interesting hybrid where you have the flexibility of the web with some of the speed of a native applications. For example, we’re caching many of the images and the CSS.

Even though it’s technically a web page, it looks like a iPhone application.

The best thing about the device is that it can connect to the Internet. That means you can mock up the user experience with simple HTML pages, and test it on your phone. Apple has produced a kick-ass guide for developing for the iPhone, and you can replicate much of the experience as you would have with a native application in HTML. You can come up with the idea yourself in rough form, and then show it to a developer when done and say, “Hey, this is what I want built.” There’s nothing better than a visual example.

Test it with friends.

Because it’s a mockup, it doesn’t have to be perfect, but you have a pretty good idea if it’s going to work or not. That way, you can work out some of the ideas before you get to development, and that will save you time and, most importantly, money.

Get a Technical Architect

The worst thing about new technology is there are all these small details you have to consider before implementation. I ran into that with the first application I designed, Pick An Excuse.

The application was designed for iOS 4, which cut out half of the market. There wasn’t a single iOS 4 feature.  A bunch of my friends wanted to download the application, but couldn’t. The application didn’t have a single feature in it that required iOS 4, yet I had to pay my offshore firm to downgrade it.

This was because I didn’t discuss what I wanted exactly at the very beginning. It would have been nice if that was a question I was asked during development, but it wasn’t.

The solution: get a strong technical architect that you can discuss every detail with. Devil is in the details especially in the mobile world. I have one now, and we discuss everything about the experience. He’s great, because he fights for the user too.

Have Fun with It

Remember, it’s your passion project (and your money).

Have fun with it. Experiment and play, because there’s nothing better than pulling out your phone out at a bar.