Five Early Thoughts About Google Plus

It pays to know someone who knows someone who’s cousin’s with someone at Google — Thanks Jen! I’ll send along my extra kidney later!

I was able to wrangle a Google Plus invite yesterday, and have been playing with it. it’s cool, and I think a serious competitor to Facebook (as opposed to the steaming pile known as Google Buzz). I’m sure there’s also more on the pipeline. Kudos to Google for hiring someone that doesn’t test 41 shades of blue, because social is sometimes not data driven.

They didn’t try to reinvent the wheel, but it has some really slick features.

This all comes on the heels of MySpace selling for $30 million — a nice reminder dominance on the web can be shortlived. And frankly, this is going to hockey stick for a while, because it’s that good.

One really big feature request: can I please hook it up to my Twitter to send stuff there?

Here are my thoughts way too early in the morning. 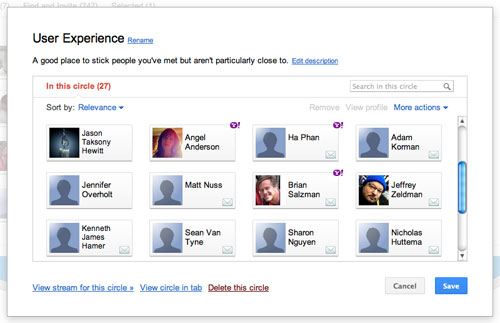 Gettin’ dizzy: It forces you to use Circles, and that’s a good thing

The biggest problem with Facebook now is there’s no way to filter friends easily — their list functionality sucks, so they have that MySpace problem where everything goes to everyone. Right now, being associated with MySpace on anything is a bad thing.

I don’t need my parents knowing about my whiskey addiction.

In Google Plus, when you add them to your network you have to put them in a Circle. A lot of people will have one Circle with all their friends, but that’s their fault. It’s relatively easy to sort through your friends (I’m sure more so if you’re not me with 500 people) in your friends list. It’s really nice that it’s not a barebones interface — despite all of Google’s assertions that’s what the user wants. Drag and drop is okay, kids, in the right context.

The elegance of the Circles interface is astounding (there’s more user feedback than you can shake a stick at) and one of the more elegant ways to add people to groups. You really need to be on a large monitor to use if effectively, but I’m sure they’ll fix that.

Recommendation — if you drag a friend into a Circle, and they’re already there, they shouldn’t be selected onBlur…show more of an error they are in that circle. That would be awesome.

You can take that data with you, yo 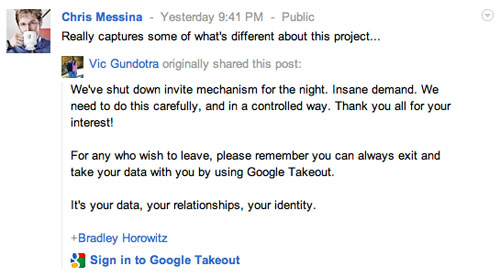 Facebook is also going to get a really nasty lesson in data portability: you can import your friends into Google+ without having to Connect using a Yahoo! account (I wonder how long this is going to be open?). Facebook’s in kind of a “screwed if you do, screwed if you don’t”  situation.

For the the record, Google’s already stated you can take your data with you. 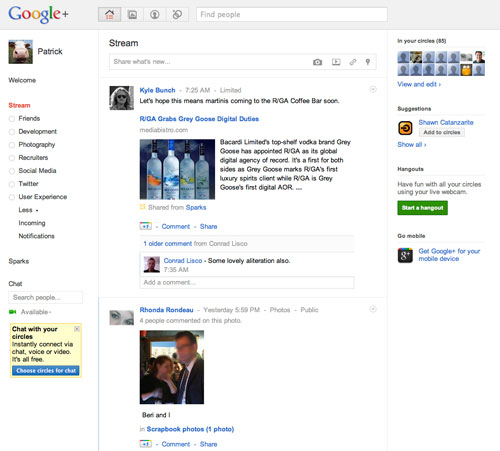 The status feed is a ripoff of Facebook’s, but more elegant

The layout is clean. Real clean. Some of this is because they’re starting from scratch, but some of it is because they’re focusing more on the user. More importantly, people don’t have to learn some paradigm like Google Buzz — this is exactly what they are used to, so they can start using it. And unless Facebook has some kind of patent on the Newsfeed that covers this

Switching between Circles is fairly easy, but I honestly don’t see people using this too often. The reason you would post to certain Circles is to protect your data; you wouldn’t use it too often to filter your data (ask Twitter about lists, and you learn that usage isn’t very high). 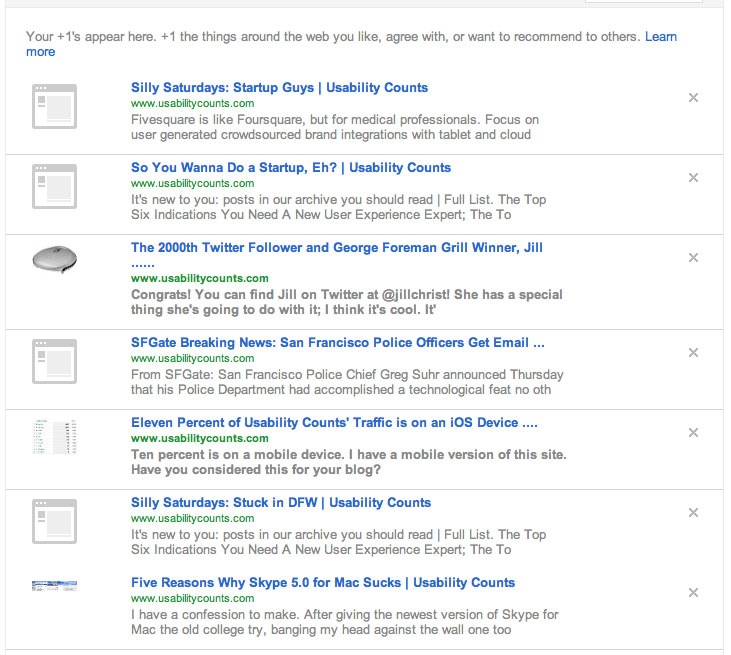 It’s hooked up to a status feed. It’s Facebook’s version of like, except it actually keeps track of what you shared in a nice list, and you can delete items off of it easily. 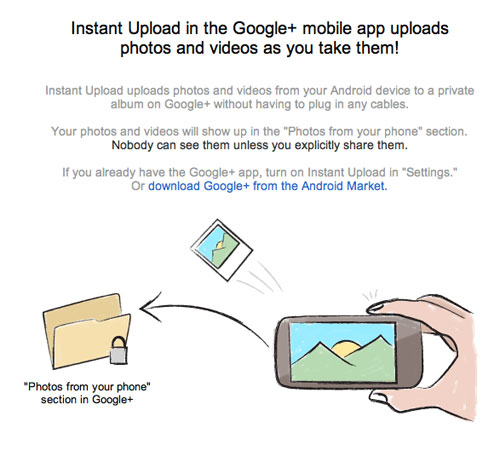 My photos? Into the cloud so they’re already there? That’s genius!

I do have an Android phone, but I hate it.  It’s a battery sucking monster.

However, once the iPhone app is available, I’m downloading it and using it.

Uploading photos is very consumeresque (I know, that’s not a word, but it’s my blog) — drag and drop. It apparently hooks up to Picasa, which would be wonderful because then I could manage them locally using a native application. If there are multiple ways to manage photos within Google Plus, that’ll be awesome.

How so I rename albums?

They didn’t try to do something new and different, because people want the same.