GigaOM: Why Data Without a Soul is Meaningless

Great read, for you data wonks. Data has to have meaning:

The problem with data is that the way it is used today, it lacks empathy and emotion. Data is used like a blunt instrument, a scythe trying to cut and tailor a cashmere sweater. Some folks do a better job of making data interesting — like the fine folks at Foursquare. They use cutesy phrases to remind me of my coffee addiction and occasionally point out that Jared Kim and I are besties when it comes to eating ramen noodles or visiting Hakkasan, but they don’t really tell the whole story and they need to do more.

[Foursquare] knows that I check-in with a handful of people, whose relationship to me can be inferred from the social graph. Add to the mix the fact that I have left tips and taken photos at that spot. Now, compare it to all other coffee shops I have checked into and how they rank against this one location. Add all of them up, and you end up with a rudimentary conclusion: I don’t go to this coffee shop simply because it’s an interchangeable part of my daily routine, or because it’s on my way to work. I visit it because it is my happy place, my one cup (or dozen) of zen. And a company like Foursquare could use that fact to package even more compelling experiences for me.

The symbiotic relationship between data and storytelling is going to be one of the more prevalent themes for the next the few years, starting perhaps inside some apps and in the news media. I was reminded of the future filled with data narratives when I saw this visualization – Out of Sight, Out of Mind, by Pitch Interactive. It takes data about drone attacks and makes them visual and easy to understand, and in doing so, elicits a strong reaction.

But it merely scratches the surface — presenting a slight improvement on an infographic that might have appeared in the pages of a magazine. In a future where we have tablets and phones, packed with sensors, the data-driven narratives could take on an entirely different and emotional hue.

How are you using data?

Looking For A Place To Collaborate On Designs Virtually? Try Out Hunie.

I’ve been kicking the tires of a new collaboration platform, Hunie. It’s a place where designers can posts their designs and get feedback from other designers who are experts in the field (you know, not those self proclaimed experts).

Designs are easily annotated, and it provides even non-designers and great platform to comment and collaborate. 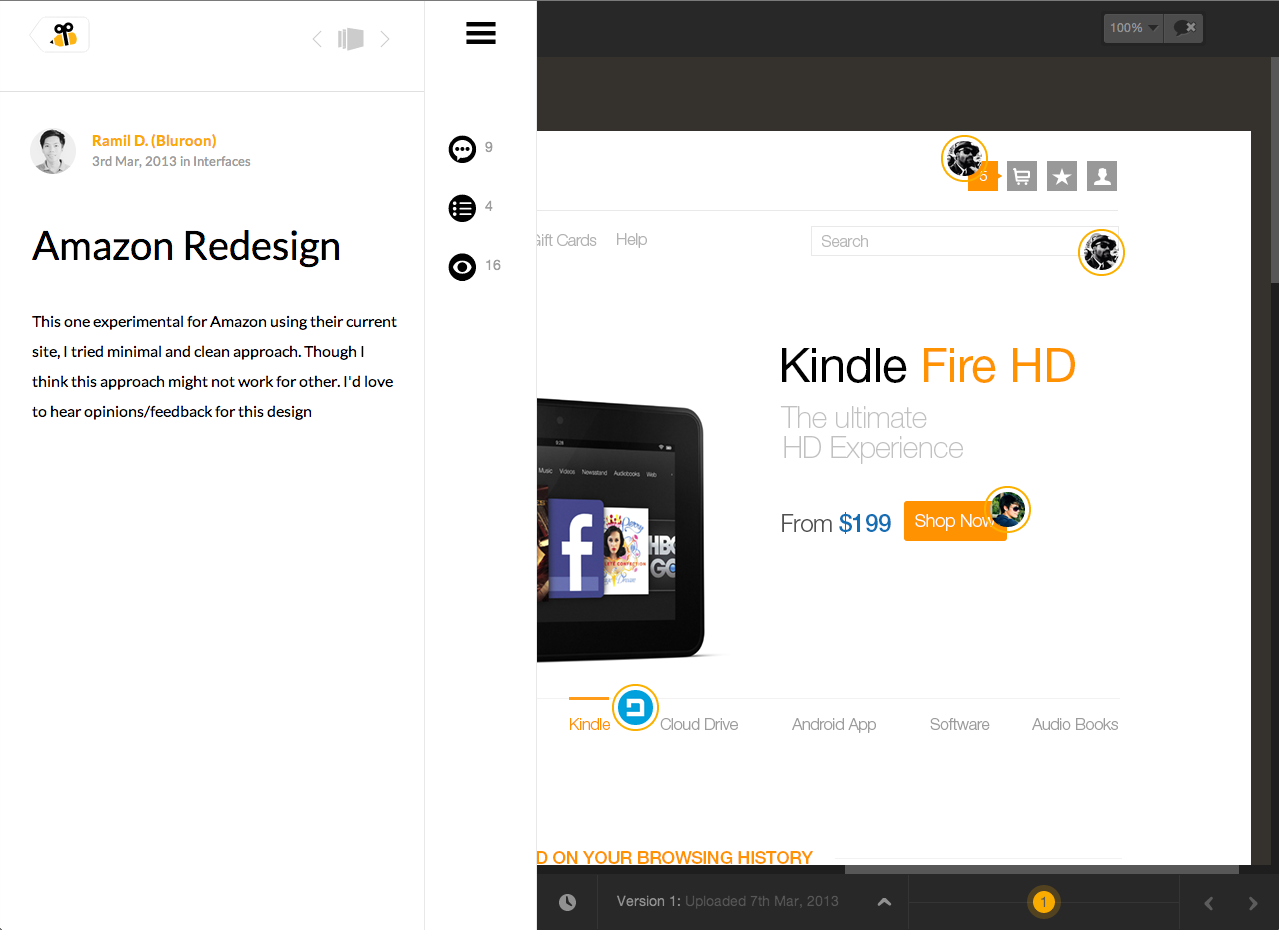 Congratulations to Damian Madray on the launch.

Oscar Godson: What I Learned At Yammer

Every once in a while, I read an article that is completely spot on about software development. Oscar Godson’s What I Learned At Yammer is one of those articles. Remember that he’s a developer when you’re reading this, not a user experience professional. Great developers understand the user experience process and how it works with software development. They know what it means to test, build fewer features, and concentrate on an end goal of a product sold holistically, and not by bullet point.

Every one in software development should read this. Cheers.

Today marks my last day at Yammer. It’s been a hell of a ride. It’s bittersweet. I’m leaving Yammer to be back in PDX to be near family and long time friends. I’ll be starting at Simple as a front-end dev where I’ll be changing banking for the better.

While at Yammer I learned a lot. Not just about programming, but about running an engineering team and project management as well. Yammer not only made me a more skilled programmer, but a smart programmer. I decided to write up some of the things I learned outside of just programming that I’ll probably bring with me to every company I work with in the future.

Test all the things

I can’t stress this enough. If there’s one thing I learned at Yammer it’s that you need to test everything, and by everything I mean, everything. It’s not just about getting your users to come back or to engage with your software more. That’s a large piece of it, but it’s also about saving countless engineering time. A lot of people I talk to who don’t do any testing say that they feel their intuition is doing fine because they can see that the overall new and returning users are increasing. What they’re missing is that, how do you know what feature is driving those gains? Which features are hardly even being used? Could you increase your new users by 2x, 4x, 100x, what it’s increasing at now?

I spent some time trying to think of a good analogy of this problem and this is the best I could come up with:

Not testing your software is like playing darts in a pitch black room. When you throw the dart you will be able to hear if it hit the target or hit the wall and fell to the ground. What you can’t really do is adjust your throw. You don’t know where you hit the target when you did, just that you did. Testing is like turning on the lights. Now you can see the target. You might still miss here and there, but if you miss you can readjust.

Testing also allows you to figure out what features to kill before you spend too much time on them. You might have this idea that some feature is going to be super awesome and everyone and their dog will want to use it. So, you spend all this time building it out and you put it into the wild. Overall it gets good reviews from a vocal minority (probably power users). What you might not know is that most people don’t really use it or don’t understand it. Now you’re spending 90% of your time making features for <10% of your users, or not, but you really have no idea. This feature could be expensive time wise to keep up. Maybe it has a lot of support tickets or is unreliable for some reason.

Testing allows you to move faster, make better products for consumers and keeps engineers from wasting time with features nobody uses.

Unit test all the things

I didn’t get how important unit tests were until I had to refactor a large chunk of code for a project. I had absolutely no clue what I could and couldn’t remove or change and even if I thought I could remove or change it I wasn’t sure if I had broken anything somewhere else in the product. Around the same time there was a huge push at Yammer on the front-end side to put tests on everything. It became a rule that you can’t ship it unless you have tests. Looking back I wish that was the rule from the start.

A lot of people think tests slow you down and it’s over hyped. It’s not. Sure, making a small bug fix that’s a 1 line change and having to write 12-15 lines of test code seems overkill and a waste, but you get all that time back tenfold when someone goes “Huh, wonder if we need this line here?” deletes it, and the “preventLaunch() is called to prevent accidental nuclear weapon launches” test fails. Not only does the next guy know it’s important and why, if the code needs to be refactored they know what they’re missing and can make sure the app runs as it did before.

Autonomy and trust are a must

If you’re the owner, manager, etc, let your employees do their job. Hire engineers you respect and leave them alone. If you can’t trust them to do their best work and work that’s acceptable for your product you shouldn’t have hired them. Simple as that.

Instead spend your time helping them break down obstacles and blockers. Make them happy. As long as they get their work done, don’t question when they come and go or if they watch cat videos and browse Reddit /r/wtf all day. Some of the best engineers I know work only a few hours a day, but get more done than others working 8hrs. Being creative is hard and giving them more rules kills creative thinking.

Originally Yammer had no policy on vacation. They called it the “take what you need” policy. We all rejoiced. I thought it was amazing and it’s a great selling point when trying to recruit people. The problem is nobody takes vacation when they can’t lose it and there’s no pressure to use it. When you do use it there’s no limit so you have to decide what’s acceptable. Obviously, not every employee thinks this way, but when we introduced a three week vacation policy people were actually happy including me.

My suggestion to startups thinking about unlimited vacation? Instead, give 3-4 weeks of vacation, but if an employee wants more just give it to them.

Your employees shouldn’t have to work long hours on a daily basis. If your employee is working long hours to complete a projects regularly you’re mismanaging the projects. The choice is pretty easy actually: would you rather have an employee for 1 year who worked 12-14hr days but burned out, was unhappy and quit, or an employee for 5 years plus who worked half as many hours, but was happy and working optimally? The hours don’t matter it’s what they produce.

And lastly, use Yammer

I had never used Yammer until I started at Yammer. In fact, to be honest, I was skeptical about working at Yammer at first because I wasn’t sure how interesting it would even be. “It’s just some crappy Facebook clone”, I thought. My friends there insisted it wasn’t, so I decided to give it a shot.

The first day it became pretty obvious just how useful it was. All our docs were on there. On-boarding processes, tips for new employees, everything. It was all where I could find it. I could message HR about general HR questions, in the public feed, get responses and months later someone else would drop by and say thanks or expand on it. People don’t realize just how useful it is and once you start using it you forget how useful it is until you don’t have it anymore and you’re jumping between a dozen different products with fragmented conversations between email, chat, and other products. Yammer pulls it all together.

It’s also extremely useful for project management. At Yammer we’d make a group for each team (engineering, front-end, rails, etc), as well as groups for each project (inbox, online now, etc). This made it so we could put specs, comps and the conversations around those in a central location where we could easily find it. This also killed the need for doing stand ups, weekly team meetings or SCRUM. We could see what everyone was working on at any time in any project. It’s also extremely useful to be able to share a Yammer thread to show past decisions about the product and why those choices were made.

There’s so much more I learned, but I’m thinking about expanding on these individual topics, or things I didn’t cover in separate posts. Yammer was the first job where I came out feeling like I had more to offer my next team aside from just better programming skills. If you have any questions about any of these things feel free to contact me.